Eight years ago, she woke up a cheerleading, softball playing, running, 15-year old. By that afternoon, all of that had changed forever. Nearly a decade later, quadriplegic athlete, model and cupcake extraordinaire Jessica Kruger shares what she wishes she’d known from the start.

“You are never going to walk again.” It’s a line that many of us in the spinal cord injury community have probably heard. Seven words that when combined together have the ability to flip your life upside down and leave you feeling broken.

When I first heard those words I had just turned 15. I was lying in intensive care, and wasn’t ready to hear them. At the time, I was still in shock, surrounded by a frenzy of beeping monitors, frantic nurses and devastated faces—I didn’t know what to think.

When the morphine haze wore off, and the hours stopped merging together I began to consider the impact of those words. At first I took it as a challenge—“I’ll show you!”—and spent the next five months focused on the one baby toe that I could wiggle. That toe was hope for me in the beginning. But eventually hope turned to frustration, and I didn’t understand why all of my hard work wasn’t paying off.

At first I took it as a challenge—“I’ll show you!”—and spent the next five months focused on the one baby toe that I could wiggle.

I was injured in a fall—I fainted at the top of a 20-foot ladder while painting a house—at the end of June, and I had Softball Provincials coming up at the beginning of August. Up until the last week of July, I was 100% convinced that I would be “up and running” in time to play. 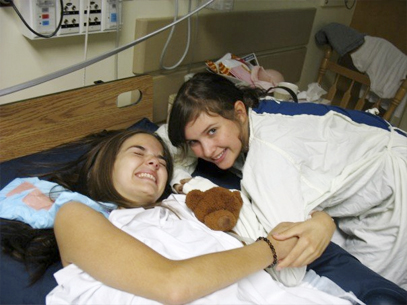 But the realities conflicted with the idealizations. And the one toe didn’t lead to all ten of them following suit as I had intended it to.

After I realized that I wasn’t going to be “okay” in my own interpretation, I focused on being “okay” in everyone else’s definition. I worked on getting stronger to satisfy my physio, did hand exercises to reassure my occupational therapist, put a smile on to convince my family, and cracked jokes to distract my friends. Maybe I could persuade everyone else that this wasn’t really happening, and then I wouldn’t have to acknowledge that it was.

I thought that it had worked: over time I forgot that I had been acting and began to believe that I was living. I returned back to high school, got involved in wheelchair sports, volunteered, got a boyfriend, spent time with friends and family, and everything seemed “normal.”

Mmmm. A part-time entrepreneur, Jessica’s cupcakes and baked delights are a sight to behold (and not so hard on the taste buds, either.) Photos (left to right): Wonderlust Photography, @PineconeCamp.

I was always busy, rushing from one place to the next; barely able to keep up, let alone stop and think. One day, after a series of days feeling very unwell, I woke up with a collapsed lung and was rushed to the hospital. Once there, I was put on a ventilator and moved to intensive care. The doctors explained that my persistent cough was actually a symptom of pneumonia, and neglecting the symptoms and lacking the diaphragm muscles to clear my lungs had lead to a large amount of phlegm buildup, which ultimately caused the collapse of one lung.

I wasn’t okay. I was a 17-year-old quadriplegic lying in a hospital bed, relying on a machine to help her breathe, and all I really wanted was to get out in time for my high school graduation.

I drifted in and out of consciousness over the next three weeks and began to question the “I’m okay” mantra I had been living by. I wasn’t okay. I was a 17-year-old quadriplegic lying in a hospital bed, relying on a machine to help her breathe, and all I really wanted was to get out in time for my high school graduation.

Fortunately, I did get out in time to don my black and white mermaid-fit gown and join my classmates in crossing the stage, allowing me to once again slip back into a content oblivion.

It wasn’t long after graduation that I contracted a bladder infection. I went to the doctor, took a bout of antibiotics and attempted to carry on with my life. A week after the first infection came another, and then another after that and more after that. This string of infections lasted nearly three years, and throughout that period my body grew resistances to all oral antibiotics, which meant that I was forced to go in for IV treatment every time I had a new infection. The meds not only stole my time, but also my energy, once again interrupting the comfort of the denial I had so masterfully constructed.

Somewhere during that string of infections I hit my rock bottom. I found myself in a place of self-pity, anger, frustration, and confusion. I asked myself the question that had been lingering just beneath the surface for nearly three years: “Why Me?” There was no answer, and that was okay, because it was the question that allowed the realizations that led to the healing. I didn’t want to pretend to be happy anymore—I wanted to genuinely feel happy and I wasn’t sure how to do that.

Previously I had believed that socializing with other people in my circumstance was admitting defeat, but now I was ready to give it a chance.

Slowly, with time, I began to acknowledge that I was likely never going to walk again; rather than devoting my energy to pretending I wasn’t really in a wheelchair, I began to accept that I was. Previously I had believed that socializing with other people in my circumstance was admitting defeat, but now I was ready to give it a chance. I dedicated myself to wheelchair rugby, spending hours and hours a week with my teammates. I listened to them gossip about everyday “quad problems” and rather than cringing in fear that someone walking by might overhear, I was relieved to know that I wasn’t alone. 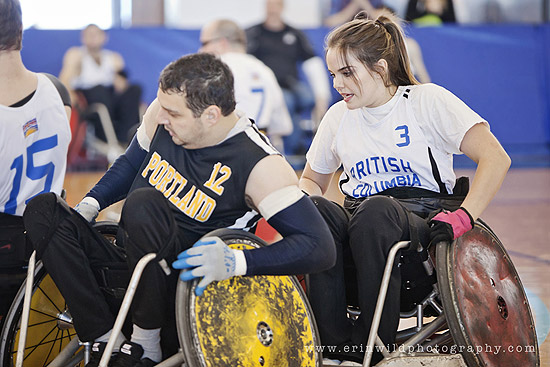 Once an athlete, always an athlete. Jessica playing Wheelchair Rugby with team BC.

Eventually my friendships with my fellow quads and teammates grew stronger, and they pushed me to be more independent. With time I learned to transfer from my day chair to my rugby chair without help, traveled with the team without a friend or family member for back up, and traded my ramp van in for a car. I didn’t realize it was happening, but being surrounded by independent, successful, driven, men and women in chairs changed my perceptions. I was proud to be a part of this community, and owe them for the confidence that I now have.

Looking back on that day, eight years ago, I wish I could tell myself everything that I know now. I wish I knew what I was capable of, that the accident was going to make me stronger and leave me so much richer. I wish I knew that one day I would wake up and forget that I was supposed to roll over and walk to the bathroom, that I was still going to be able to travel and see the world, just in a slightly different way and with a whole lot more adventure.

I wish that I knew what being in a wheelchair really meant. I wish that I could have understood the perks—no, not the prime parking, cushy bathrooms, or shorter lineups—but the friendships, the community, and the satisfaction and pride that comes years later in a moment of reflection. This life, with all of its highs and lows, is the one that was meant for me, and I am grateful to be able to live it.

In 2013, Jessica become the new face of Lise Watier’s “Something Sweet” perfume, beating out 400 other contestants for the contract.

How do you mark the anniversary of your injury? Is there something you’d like to tell your former self? We’d love to hear—and share— your story! Email Maya at mpankalla@sci-bc.ca.

Guest Blogger
We're always looking for new stories and exciting perspectives. So we're proud to feature a variety of guest blog posts from our SCI BC peers as well as from the global spinal cord injury community. Have a story of your own to tell? Send your posts and ideas to thespin@sci-bc.ca!
Recommended Posts
Showing 3 comments
Categories
Archives
Browse by Keyword