I had tried many dating websites—some that don’t even exist now. Nothing was working. I thought, “Why do I need a man to validate my existence?” All the “dates” I’d had up to this point had been no-shows or bizarre. I stopped checking the sites I would visit regularly. But when I was on Facebook, from time to time, I’d look at their version: Are You Interested? It was always good for a laugh. Then one day I saw a smiling face with sparkly eyes—and he had clicked yes on me. I thought, “He doesn’t look like a total freak…what the hay!” I clicked on the yes button and my life changed forever.

I clicked yes! “What am I doing,” I thought to myself. “This will simply be another disappointment.” I felt like I’d been in contact with every reject out there: the guy with the cripple fetish, the guy with the wife, the guy that would communicate endlessly on email and phone but never showed up for in-person meetings and, of course, the one that knew I was in a chair and had seen many pictures of me but walked right past me at a very small Starbucks! That one hurt.

Oh well… I’d probably never hear from this sparkly-eyed cutie that had clicked yes to me. 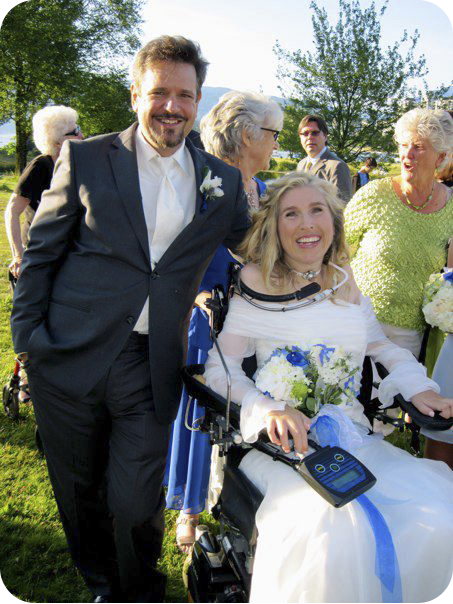 But the next day I had a message. It was funny, intelligent and hopeful. I responded, we sent messages back and forth, and I got to know Greg. We had a lot in common and, while he was a few years older than me, we had basically grown up in the same area of Vancouver.

Let’s meet for coffee! I was always very careful, the first few meetings had to be in a public place during the day. Greg and I decided to meet at a Starbucks at UBC. It was perfect. I knew the area, it was near to his work (he really does have a job, yippee!) and what did I have to lose?

In confirming the details, he sent me a message saying: “How will I know which person is you?” My first thought upon reading that was, “Is he stupid? I’ll be the one in the wheelchair. Duh!” I thought about it for a while and realized that maybe he didn’t know I was in a chair. Greg had access to my page on Facebook but maybe he hadn’t looked closely at the photos (it was a bit vain of me to think he had). So I sent him a message saying, “You can’t miss me—I’m the one in the wheelchair.”

I wasn’t sure what to expect in response. Greg seemed nice enough to meet for coffee, but who knew? The chair had definitely been a deal breaker with other guys. His message back said, “Okay, will you be coming by HandyDART? I can meet you at the drop off.” I didn’t know what to think and replied not to worry… I had my own van and my assistant world drop me off. By the way, how do you know about HandyDART? He messaged back that his mother was in a wheelchair and she often used the shared ride service.

Wow! What does this mean? Is Greg sensitive and caring? Is he just a cool down-to-earth guy? Is he looking for a young version of his mother to fulfill an Oedipus complex? I had to stop analyzing everything and meet the guy!

We met face-to-face on July 31, 2008. It was a yucky, rainy day (which was really irritating because I wanted to wear a semi tarty top) and as with all of my “first dates”, I felt sick to my stomach. I had it all planned out: I would get there fifteen minutes before our planned meeting time so that I could compose myself… find a good place to sit (not with my back to the door)… have my coffee already bought and in my cup holder… re-apply my lipstick… and scrunch my wet frizzy hair.

As I was rolling toward the Starbucks, I saw a guy standing in the rain with a large umbrella in his hand looking up and down the street. Immediately, I said to Irene (my assistant) “Oh no!” (but I used an extremely bad word) “That’s him!”

He was twenty minutes early and clearly there to assist me into the building. Irene thought it was so sweet and I was baffled. My carefully thought out “staging” plans were destroyed.

He was twenty minutes early and clearly there to assist me into the building… My carefully thought out “staging” plans were destroyed.

We met, went inside and found a table. He insisted on buying my coffee (damn, now I’m beholden to him). Irene set me up with the cup and then went off to kill time for a bit before we met at our preplanned location.

(While I’m on the topic of Irene, I have to say she was my biggest cheerleader.  While others would look at me blankly when I talked about how tough it was to find a decent guy, Irene would always be encouraging, reminding me of my wonderful qualities and beauty. I couldn’t have hung in there without that support… thank you, Irene.)

Greg and I proceeded to sip our coffees and chat. We were both kind, informative, funny and of course a bit awkward (nervous). We planned to meet for coffee again.

Greg walked with me to where I was parked and we said goodbye. My emotions were mixed… Did he like me? Did I like him? Would this go anywhere? I didn’t have an instant spark but I thought that was a good sign. The instant spark thing had never worked for me in the past. What have I got to lose? If he wants to meet again… let’s!

Needless to say, the spark came eventually and gets brighter every day. Our courtship lasted for quite some time. After we had been dating for a couple of years, we started to talk about marriage. I was scared (of course). Was I worthy? Am I enough for him? I had all those insecurities that are often attached to a disability. The one thing I didn’t doubt was Greg’s devotion. And, near the second anniversary of our first meeting, Greg told me a story that sealed the deal.

“I saw a vision, the most spectacular sight I’d ever seen, coming toward me.”  I thought, what is he talking about? He continued with, “Her friend was holding an umbrella over both of them. I thought, I will never have a chance with this gorgeous woman!”

I said, “Are you talking about the first time you saw ME?”

Looking back now, the reason that I finally married Greg seems a bit shallow on the surface. I knew that I loved him but this reinforced the fact that he always saw the person first. Not my chair… not my limitations… he saw me.

Precisely four years after the day we first met in person, we were married. It was the best chance I’ve ever taken.

Guest Blogger
We're always looking for new stories and exciting perspectives. So we're proud to feature a variety of guest blog posts from our SCI BC peers as well as from the global spinal cord injury community. Have a story of your own to tell? Send your posts and ideas to thespin@sci-bc.ca!
Recommended Posts
Showing 4 comments

Zoom connection info is below. Join Rod Bitz for an at-home 45-minute group fitness session. Anyone is welcome to join! It is best to connect with video, but audio and dial-in

Join Rod Bitz for an at-home 45-minute group fitness session. Anyone is welcome to join! It is best to connect with video, but audio and dial-in are available. Please have the following items handy for your workout session: 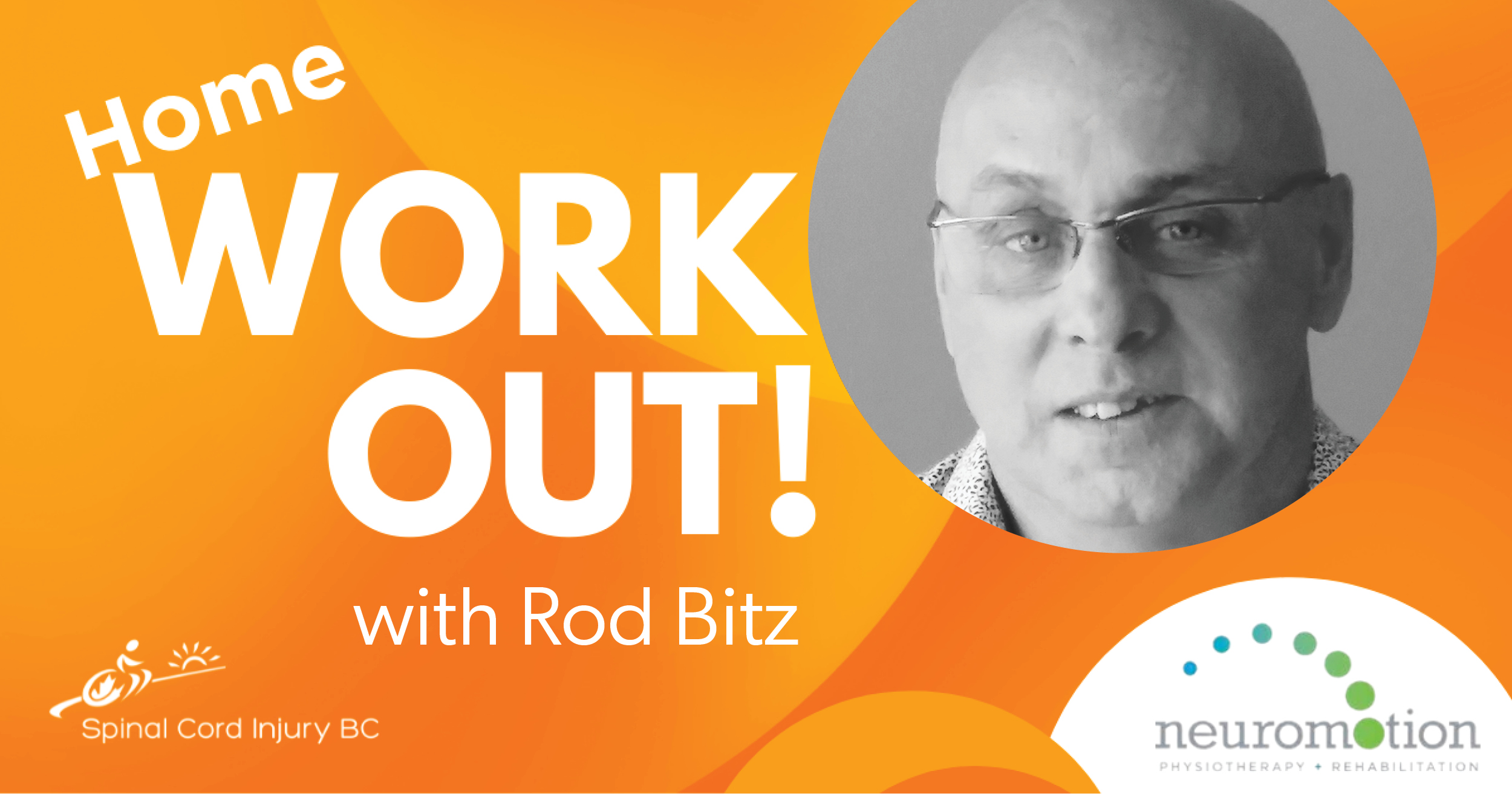 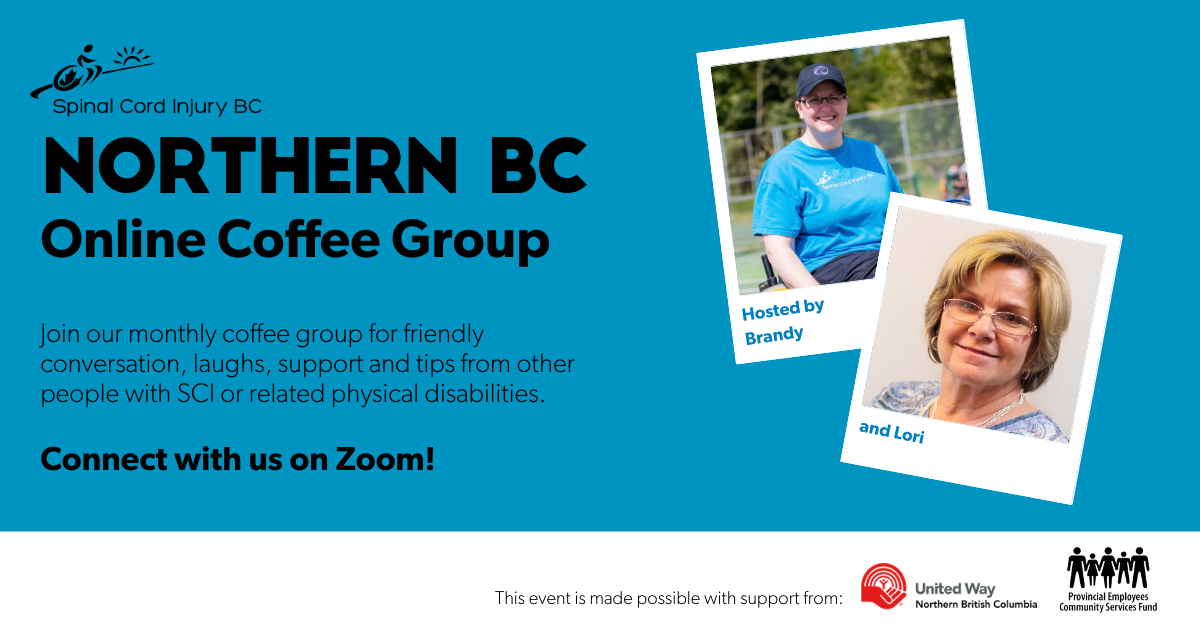 The winter months in British Columbia can be a time when people struggle with low mood. There are ways to help lift mood and feel better. Using the slogan “Take

The winter months in British Columbia can be a time when people struggle with low mood. There are ways to help lift mood and feel better. Using the slogan “Take your MEDSS!” (M-mindfulness E-exercise D-diet S-sleep S-social connection) a panel of Peer experts will provide useful information in these key areas that influence our health and well-being. The workshop will also offer those interested an opportunity to make a personal action plan. 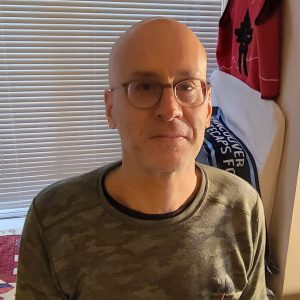 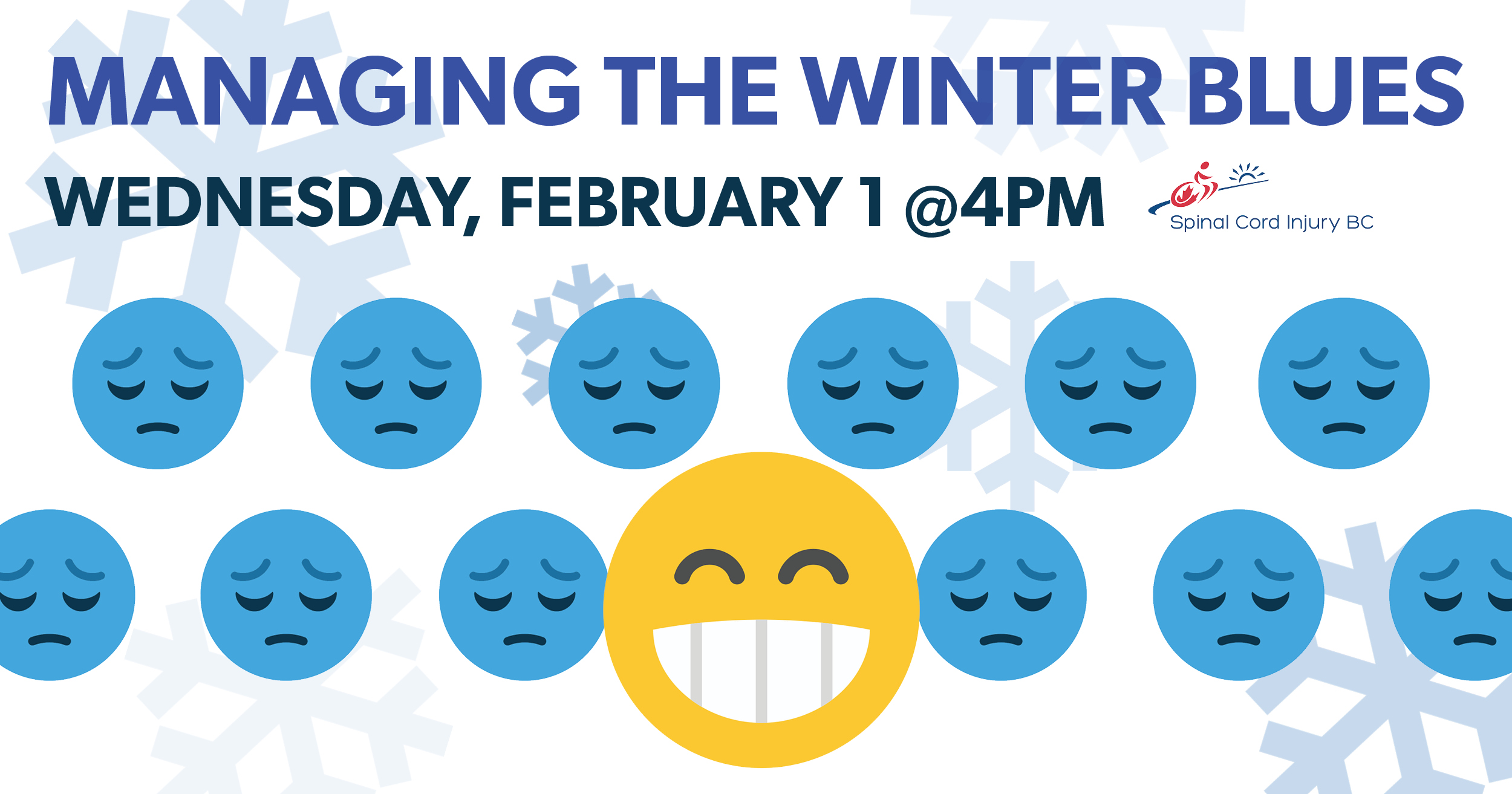 There are three keys to better writing: The first is talking about what you read (shameless plug for SCI BC’s book club). The second is sharing your writing with

There are three keys to better writing: The first is talking about what you read (shameless plug for SCI BC’s book club). The second is sharing your writing with fellow writers. And the third is learning to give and receive critique (the word is pretentious, but the group is not).

If you’ve never attended a writer’s workshop before, I know what you’re thinking: Sharing?! And while it’s true that some people write for themselves, the rest of us dream of our work being enjoyed by another person one day, which means that when you’re ready, you will need to take the leap. And what better place than a small group of people who all feel the same churning feeling in their midsection!

Our monthly writer’s workshop is a cozy place where we take turns sharing our writing and learning how to give and receive productive feedback. Your host, Lisa Hislop, is a professional fiction editor who will help you strengthen your writing and build your confidence as a writer. 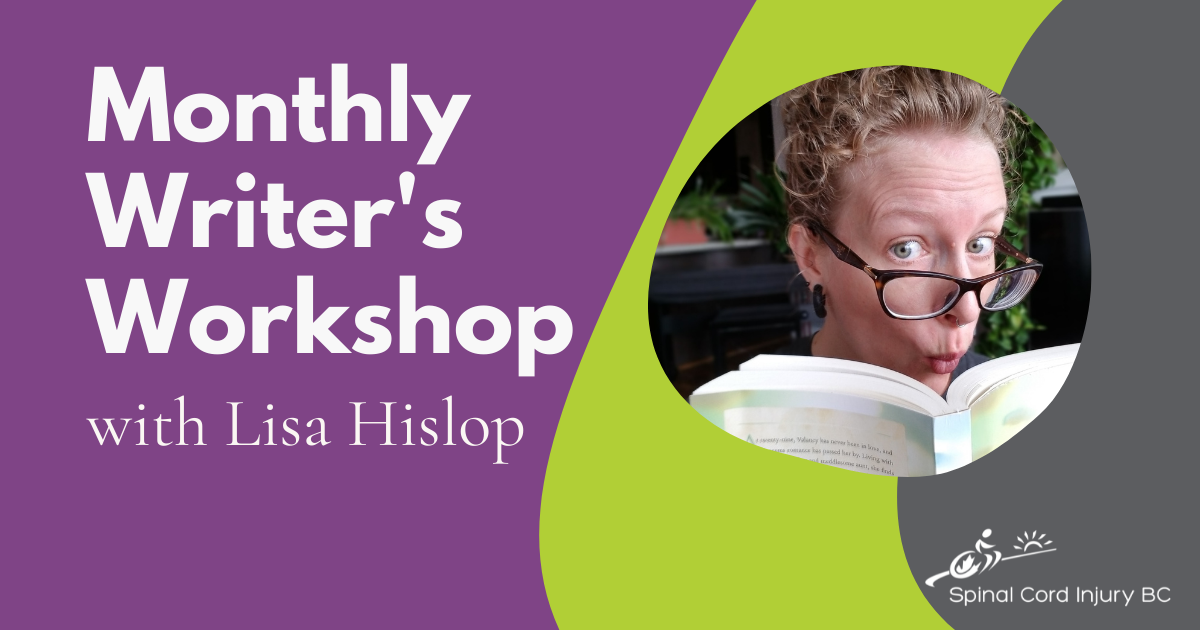 Pizza AND games?? What could be better? Come by the Cloverdale Recration Centre for some friendly competition and a tasty bite with SCI BC peers. Please RSVP with Rod Bitz at

Pizza AND games?? What could be better? Come by the Cloverdale Recration Centre for some friendly competition and a tasty bite with SCI BC peers.

Please RSVP with Rod Bitz at rbitz@sci-bc.ca to confirm your spot (and your slice!). We hope to see you there. 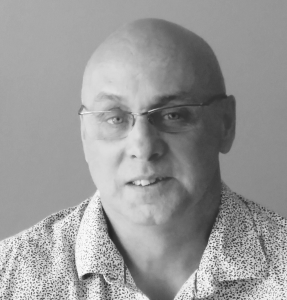 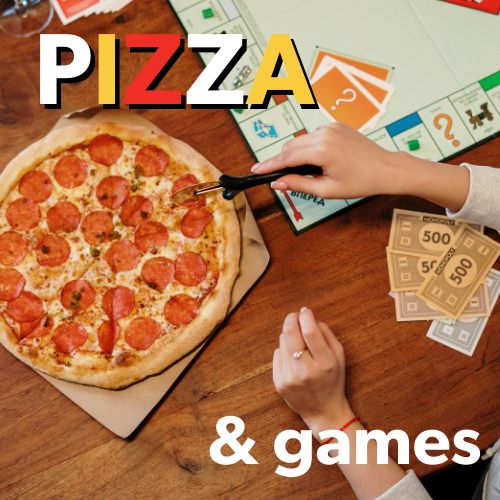