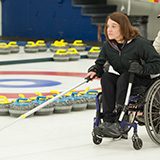 Born and raised in Quesnel, British Columbia, Alison Duddy, joined Spinal Cord Injury BC (SCI BC) as our volunteer peer coordinator in 2010.

Alison is a well-known volunteer and an advocate for people with disabilities in her community. She has been volunteering with the Canadian Cancer Society for six years by answering phones, emails and welcoming clients; she is a member of Toastmasters; and she runs an accessible parking awareness campaign.

As SCI BC’s Quesnel peer coordinator, Alison organizes monthly meetings for peers to get together over lunch and talk about issues they face on a daily basis.

“That’s what I love most about SCI BC; it’s the sharing with other peers. If I have an issue I can talk about it with one of our peers and it’s good for sharing ideas, getting things done, and dealing with any problems that you may have. It makes me wish that I had been more involved with SCI BC over the first few years following my injury,” says Alison.

Alison has a T6-T7 paraplegic injury, and was injured in a car accident due to bad weather on her 17th birthday. One of the reasons that she works hard to stay positive and active in her community is to let people close to her know that she can make a good life for herself regardless of the random twists and turns that life has thrown her way. “Things happen, but it was no one’s fault, and that doesn’t mean I can’t live a great life,” says Alison.

When she’s not busy volunteering and being active in her community, Alison is on the ice throwing rocks. She fell in love with curling in 2009 during an SCI BC “Have a Go” day and has never looked back. She is now a proud member of BC’s provincial curling team which she helped win silver in the nationals in March, 2013. One day, she hopes to have the honour of representing Canada in the Paralympic Games. “I don’t think I’m there yet, but it’s definitely in the back of my mind. I won’t make it for Sochi, but who knows for 2018?”

Back to Our Staff
Contact Us
Get Our Newsletter
© 2020 Spinal Cord Injury BC. All rights reserved. Charitable Business Number # 11883 5024. View our Terms and Agreement. 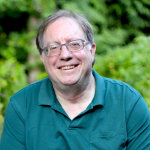