This summer former Events Lead and SCI BC Peer Jessica Kruger crossed an adventure to Yellowstone National Park off her bucket list. She shares her experience- with tips and tricks on how to make your Yellowstone camping trip wheelchair accessible. 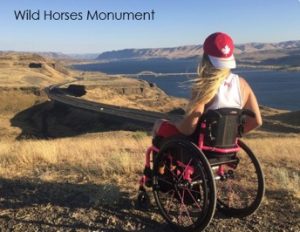 This summer, my friend Cameron and I decided to road trip to Yellowstone National Park. This was a natural bucket-list item for both of us, making it an easy choice for our summer adventure.

For those of you that don’t know, Yellowstone spans across Wyoming, Montana, and Idaho and is best known for wildlife and geothermal features.

Below is a breakdown of the thoughts/concerns/ramblings in regards to such a trip for a gal in a chair– enjoy! 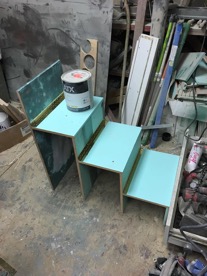 When Cam first proposed the trip I was initially hesitant because I knew that it was going to involve camping and that is not necessarily the most “wheelchair friendly” activity in the world. That being said, I’m 90% stubborn and 10% defiant, so as soon as I sense myself trying to get out of something because of the chair, my instinct is to do the opposite of what feels “safe” or “easy”. In other words, I had concerns, but we went anyways.

The first big concern I had was that I lack the ability to do a floor to chair transfer, and the idea of asking Cam to help me every time I wanted to get off of the tent floor did not appeal. Fortunately, we decided to go on the trip almost 6 months ahead, so I had time to figure out a solution to the problem.

My first instinct was to go to my favourite handy man (my Dad) and ask him to build me some sort of thing-a-ma-jig that might help me transfer. Looking back I can see that I wasn’t exceptionally clear in my instructions and that is potentially why I ended up with what was quickly named the “Jessie freight”. 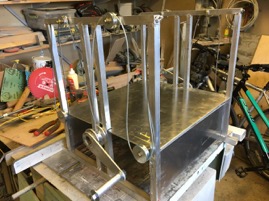 The first edition – Jessie Freight 1.0 – was a little bit large, a lot a bit awkward, and likely to bite my fingers off with it’s many hinges (pictured above). Ultimately the idea was good, but the execution lacked practicality (sorry Dad).

Recognizing that a whole lot of quad life is trial and error, my father came up with a new design, Jessie Freight 2.0. This design, while much less transportable (as the first edition folded down flat), was quite the engineered piece of equipment.

It was essentially a human freight elevator, designed to be a self-cranking, over-engineered tank of a lift. While it allowed my father to display his creativity and welding prowess, it lacked a little of the simplicity I was hoping for.

Just when I thought I was going to have to accept Cam’s help or give up on the trip, I discovered the Easy-Cot. 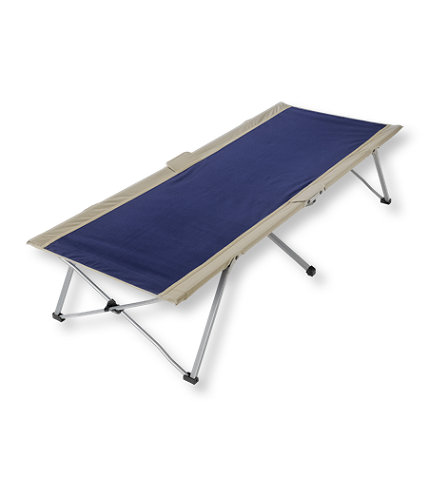 Did you know that there are fold-out cots for camping?!? (I guess this is common knowledge to people that are actually outdoorsy, but I had no idea!)

The Easy-Cot was perfect – it packed down into a relatively small carry bag, and when it was assembled it offered a comfy-ish (luxurious in comparison to Cam’s “air” mattress that didn’t hold air) bed that sat about a foot and a half off of the ground – which was just enough extra height to make my transfer possible. Once my transfer concerns were solved my only concerns were bathrooms, bears, campsites, the cold, conversation topics, and holding Cam back from the more extensive hikes.

By the time we got around to booking our campsites, everything that could be pre-booked was taken, so we decided to go with the flow and snag a “first come first serve” spot. Yellowstone has 12 campgrounds, 9 of which have been deemed to have “wheelchair accessible spots”, 5 of which are “first come first serve” sites. I don’t know if you’re any good at math, but according to my calculations, that means that we had a 41% chance of getting a camp site, when the rest of the world had a 55% chance (I made that up), so the pressure was on.

I hate to admit it, but I’m really one of those spontaneous people that is solely spontaneous out of spite. Like, “fine I’ll do this thing that feels reckless but only because I refuse to let you think I’m not fun” when in reality I’m thinking, “God, I wish I had every part of this planned out so that I could identify the things that might go wrong and plan around them…” but admitting that would crush my inner ‘cool kid’, so I go on living in a state of uncomfortable spontaneity denial.

Translation? I wasn’t super excited to show up without a guaranteed place to stay.

We strolled into the park around 11am just a few days before July 4, certain that they’d have the red carpets prepared and my designated wheelchair spot waiting. Turns out a few hundred other people had the same sentiment and we quickly discovered that “first come first serve” really means show up at 6am!

Our first two campsites were a bust– completely booked. By the time we got to the third, my anxiety was rising and my desperation was apparent. We noticed a lineup in front of the ranger hut, so we parked and joined the queue, quickly learning that the people in front of us had been waiting for several hours to try and secure themselves a spot.

When the ranger came out to count the number of people in line, I shamelessly pulled out my deck of wheelchair cards and invited him to play– “Excuse me sir, can you tell me whether or not the accessible spot has been taken by somebody else in a wheelchair already?”, knowing full well that the likelihood was slim as camping truly isn’t the number one leisure activity for people in chairs.

The ranger looked at me, then looked at the 10 people in front of me in line, then back at me, and finally pointed his fingers at each person ahead and began to count out loud, consulting his little list as he did so, mentally calculating what I assumed to be available spots versus needy campers. Finally, he looked me in the eye and said, “I’m sorry ma’am, but these ladies here will get the accessible spot, as they arrived first.” I looked at the able-bodied friends in front of me with mock horror. 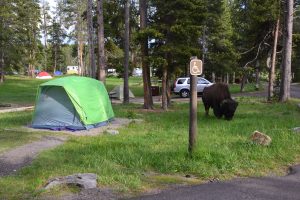 “So you don’t reserve the accessible spot for people that need it?” I uttered, equally embarrassed by my own callousness as driven by the fear of being stuck without a site. The girls in front of us looked sheepish but unwilling to trade positions.

A tad uncomfortable, the Ranger responded, “Well we hold that spot ‘til the end, but once every other spot has been given up, that one goes too”. I knew that this was reasonable and I needed to get off of my entitled “chair” but dang, was I resistant!

Prepared to admit defeat, I turned to Cameron forlorn and nodded towards the car. For a moment it seemed like he might follow the instruction (which would have been strangely out of character) when suddenly a stroke of genius struck him.

“Could you fit two tents on one spot?” he asked the Ranger. “Certainly,” he replied, and Cameron and I turned in expectant unison towards the two ladies in front of us. “Well, why don’t we just share the spot then?”, they suggested generously, almost as if the thought was there own. And voila, drama avoided.

We successfully secured an “accessible” spot at a central campsite within Yellowstone National Park. I use quotations because the term “accessible” is referring to a flat patch of grass instead of a hilly one that was relatively close to the washrooms, but hey, beggars can’t be choosers– flush toilets and flat surfaces are all a girl in a chair could ask for!

The park itself is huge (3,468 sq miles to be exact), but is actually pretty great for a chair user because it’s designed to drive from highlight to highlight, so as long as you have a car, you can see a lot of the park. Some of the specific geothermal attractions are more accessible than others– but overall, you can see pretty much everything, though sometimes at a distance, while being in a chair. Here’s a breakdown of a few of the highlights that we saw: 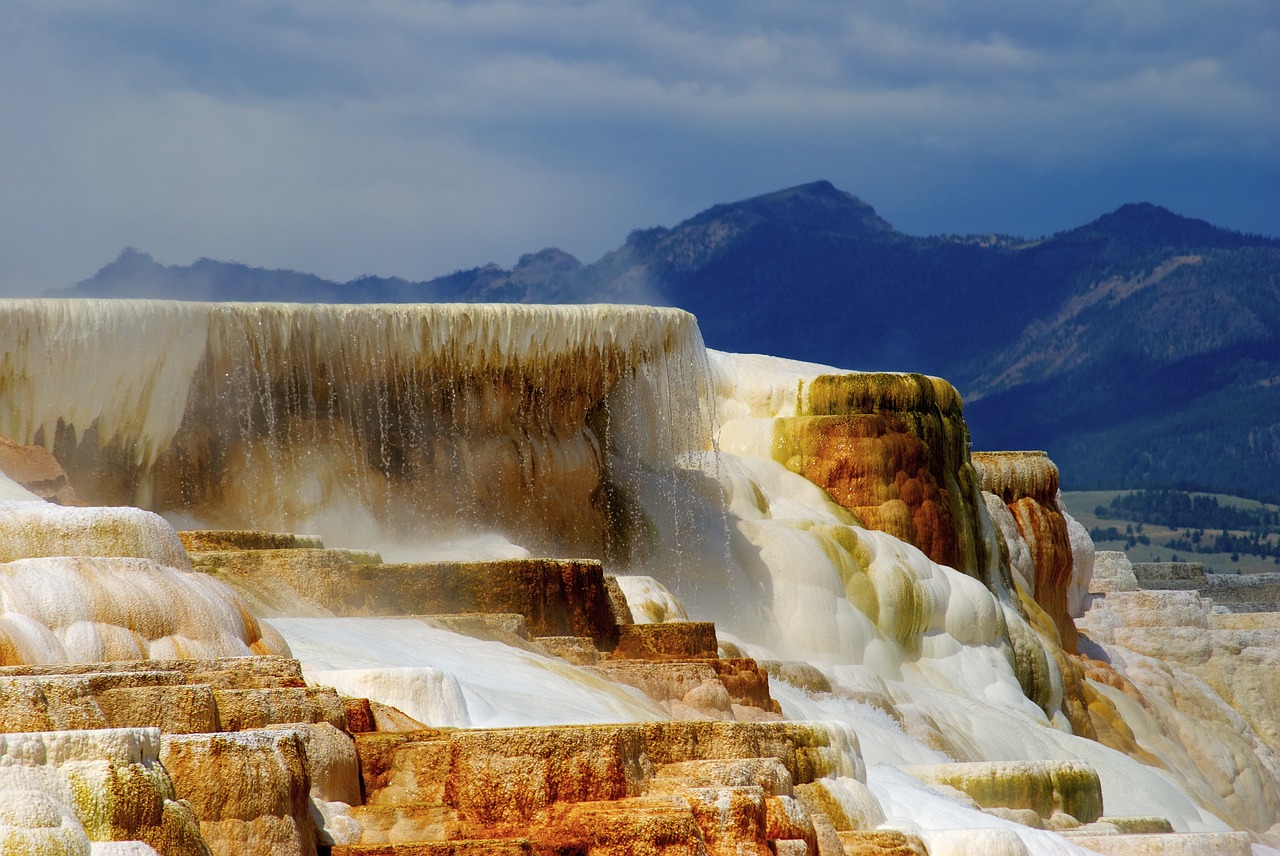 The Mammoth Hot Springs have a series of wooden ramps/stairs that you can climb to see them. The ramps unfortunately do not go the whole way up, and are rather steep, so as long as you have a willing push Sherpa, it’s a feasible quest. Plus, JUST LOOK AT THEM– it’s like a mountain of delicious orange cream soda! 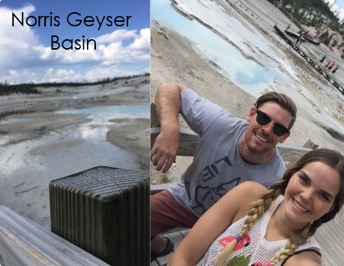 This is probably one of the least accessible attractions for wheelchair users. As suggested by the name, the geysers sit in a natural depression in the earth’s surface (a basin) which is only accessible via a series of rocky stairs. You can access the very top of the basin by travelling down a gravel path, but sadly, the view is not that great from up there.  Fortunately for me, I had trusty Cameron willing to haul me up and down the stairs, so I could fully appreciate the geysers.

Grand Canyon of the Yellowstone 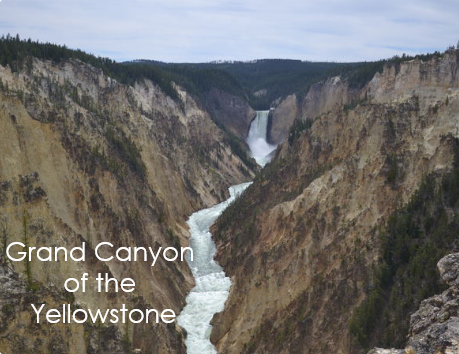 This was definitely a highlight for me, and I was pleased to discover that there was an accessible viewpoint so that someone in a chair (power or manual) could fully appreciate this breathtaking sight. 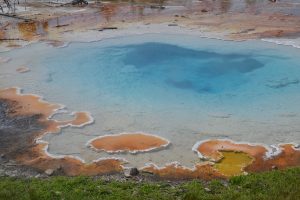 This was yet another accessible attraction (pictured below). Surrounded by wooden walkways with ramped routes, someone in a chair could navigate around the many geysers to get a great look at the natural beauty. 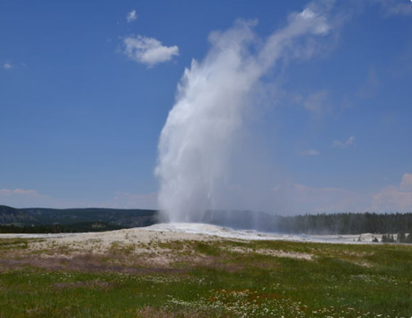 The most well-known of all the geothermal attractions that can be found in Yellowstone National Park is by far Old Faithful. While it’s predictable eruption is intriguing, I must admit that I found this attraction to be a tad underwhelming. Surrounded by touristy shops, restaurants, and hundreds of eager guests awaiting it’s eruption, this natural geyser loses a little bit of it’s magic. That being said, it is yet another fully accessible site, so worth checking out if you’re looking for places that can be reached in either a manual or electric wheelchair. 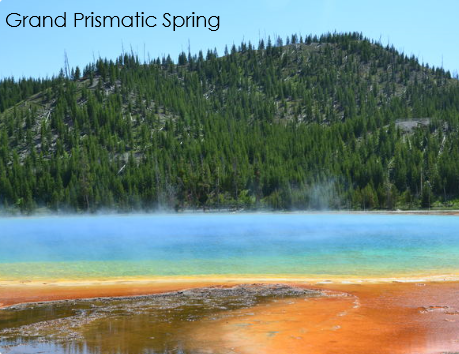 The Grand Prismatic Springs were my number one highlight from the trip. Surrounded by fully accessible  walkways, this hot spring is the largest in the United States. More impressive than its size, however, are the stunning colours that have resulted around the edges due to microbial mats (basically sheets of bacteria)– a must see for anyone interested in visiting Yellowstone National Park.

Ultimately, I think Yellowstone is an excellent destination for the outdoor loving, wheelchair-using, geothermal-seeking individual. Accessibility barriers are minimized when possible, and accommodations such as accessible washrooms and ramped paths are readily available.

A number of the highlights are even viewable from the comfort of your car, if the constant in-and-out transfers seem daunting.

Whenever considering a trip with SCI, my mentality is to adopt the “we’ll make it work attitude”. This sentiment is best accompanied with a willing friend or companion (thank you, Cam!) and the ability to laugh at the ridiculous. Trust me, there will always be something absurd that makes you want to cry (because “seriously, life?”), but that can be absolved with a good appreciation of irony and a healthy dose of laughter. This life isn’t always the easiest, but it’s ours, and we get to choose whether or not to embrace it.